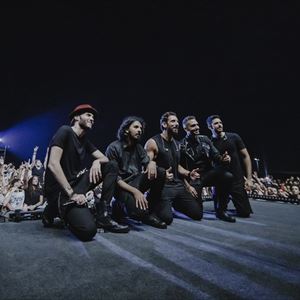 14+ only. 14s to 16s must be accompanied by an adult. No refunds will be given for incorrectly booked tickets.

After selling out two nights at the Jazz Cafe in 2018, Cairo's trailblazing rock pioneers return to London to premiere their anticipated 6th album, 'Ugly Ducklings'.

Articulating the many elements of contemporary Egyptian society that drive their generation, Cairokee's anthemic calls for freedom and societal changes have become the soundtrack to a generation and an innate reflection of their unparalleled fan base.

Their latest and sixth album "Ugly Duckling" was launched in March 2019 and builds upon Cairokee's "Parallel Universe" established in their song "No2ta Beida" (White Dot). It is a space through which they invite all the 'outcasts' to break free from patriarchal and societal shackles, traditions and restrictions. All that cannot be discussed is put on display through the ugly - the ugly duckling. Musically, the album builds on the band's iconic indie, pop and chaabi rock traditions while dancing its way through electronic influences and cutting vocals.

Special support guest: JULIANA YAZBECK
Born to Lebanese parents, Juliana draws on her mixed cultural upbringing to create her signature sound: an unlikely but mesmerising fusion of spoken word, otherworldly electronics, and haunting Levantine vocals. Her debut record SUNGOD is a political and spiritual cry; unapologetic and raw, Juliana's lyrics challenge the effects of colonisation on cultural identities and its impact on the current state of love, relationships and gender inequality.